The Attunement Bridge: Healing from an Affair 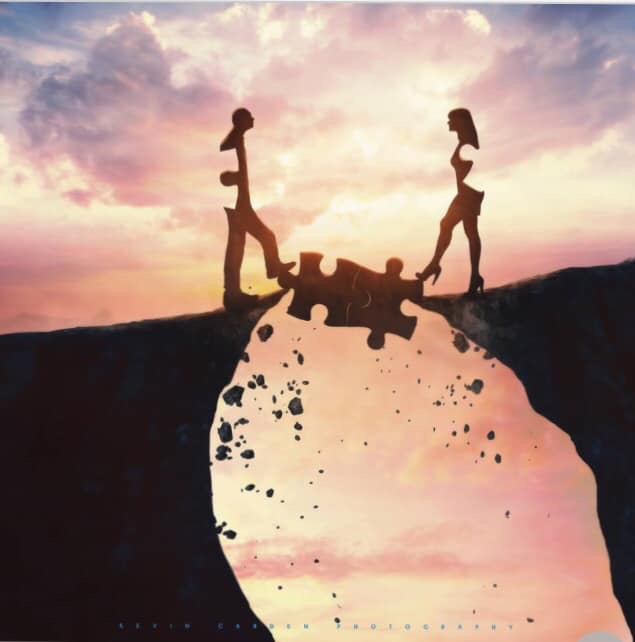 John and Shannon brought their tattered marriage to therapy, to see if they could salvage it from an affair.  Right away, we discovered they had a deep habitual communication pattern. John had a veneer of sweetness that we decided to call the “chill dude.”  He liked to maintain this state of seeming “easy going,” which appeared flexible, but was actually a defense – another form of rigidity.  On the other hand, Shannon’s nervous system ran hot.  She functioned from a high-energy; high productivity demeanor which her family referred to as “the boss.”

John’s “chill dude” triggered Shannon’s “boss,” and vise versa. He blamed her for being uptight.  She blamed him for being immature and indifferent.  They each stimulated disintegrating shame in the other.  After arguments, they’d reinforce their own angry beliefs through the stories they’d tell themselves in their heads. (Brene Brown, Rising Strong)

When Shannon’s world collapsed through her discovery of John’s two-year affair with their mutual friend, Robin, she entered therapy with me. She was reeling from the double betrayal, and wanted to focus exclusively on her own healing.  We set to work on emotion regulation, processing her trauma, rage and grief, and recovering from her life-long kinship with stress.

“I’m committed to my own healthier future with or without John!” she declared, which was the wisest thing she could have done.

John also agreed to do some therapy with me. He was interested in healing his childhood wounds, so that the emotional blocks from the past which he suspected were getting triggered in his relationship with Shannon could be resolved.

After a few weeks, Shannon’s calmer detached demeanor was the first thing that helped them both.  It changed the dynamic of their ordinary interactions.  She had pulled back – to protect herself – and she was no longer “the boss,” but her genuine self.

Although deeply hurt, Shannon was respectful with John. The differences in her seemed to leave some room for John to feel remorse, and his “chill” warmed a bit.  He wasn’t using any energy to defend or justify himself or to hide as he had before, since now Shannon wasn’t blaming or attacking him.

John was more comfortable connecting with Shannon. Meanwhile, he and Robin completely ended their affair, and after wading through a murky sea of complex grief in his personal therapy, John could reexamine the situation.  He had a deep shift in perspective, felt used and betrayed by Robin, and regretted the affair that had wounded Shannon so completely and cost him so dearly.

Even though he was under tremendous emotional strain, if he were to salvage the marriage with Shannon, it would be essential that he be able to listen well and actually empathize with Shannon by adopting her perspective.

And, even though she was essentially blameless in the situation, Shannon was willing to own her part in some factors in their relationship that had made John unhappy.

What he’d done about his unhappiness, was never okay.  They were perfectly clear on that. But she wanted to extend empathy to him, as well, and this helped them both. She owned that she’d been preoccupied with the kids and work and had taken him for granted; that she hadn’t put any effort into their relationship for a long time.

This didn’t level the playing field, but it did offer him connection.  It was a reach in his direction.

If they were each able to share in the others’ experiences, needs and desires, they might be able to create the emotional bridge needed to cross back over to a committed marriage.

We processed their most painful issues together in couple therapy, and slowed all of these important conversations way down, allowing them to reflect and resonate with the emotions of the other.  It was important that they take the time to deeply validate the feelings they heard, because that process stimulates cognitive perspective taking, a very important part of empathy.

Finally – in order to empathize more deeply, I had them voice what they imagined their partner was going through – and how they would feel if roles were reversed. In using their imaginations this way, they were engaging in a complex interplay of neural networks allowing them to experience exquisite empathy. This sparked the initial connection upon which they could continue to build the bridge. (The Empathy Effect, by Helen Riess.)

After the first few couple sessions, I had John interview Shannon.  I wanted him to stay open and genuinely curious to learn how Shannon was doing. He needed to slow his brain and keep his natural defenses from rising so he wouldn’t emotionally flee or shut down.  I reminded him to start with learning her feelings first, before getting the whole story. That would help him stay open, curious and nondefensive.

He leaned over toward her, and looked into her eyes. “Can you tell me the feelings you’ve been having, since you found out I cheated?”

She looked onto the feelings chart in front of her, seeming to study it for a very long time. The distress she was under seemed to freeze and then unfreeze her mind, making it more of a struggle to stay present and in the flow of the conversation.

Finally she looked up and said, “I’ve been feeling shocked, devastated, alone and panicked.  There’s more, but I’ll stop right there so you can get it.”

“Ok,” he acknowledged.  “There’s more, but for now you’re telling me you’ve been shocked, devastated, alone and panicked.  Is that right?”

“Yes,” she went on to list more, and he repeated those feeling words while connecting with her eyes.

“Is that all?” he asked patiently.  “Are there more feelings you want me to hear?”

A little smile of shared sadness passed between them.

“Can you give me the story now?” he continued.  “Tell me about the shock and devastation and loneliness and panic.”  He listed a few of the feelings she’d shared.

She narrated the account of her discovery of the affair.  It started with her suspicions rising so that she checked through their phone records and saw the frequent interactions with Robin. She went on to describe how she felt crushed and betrayed, how she had confronted him, how he responded that he intended to leave her and be with Robin, and the weeks and months that ensued.

John nodded thoughtfully, carefully connected with her eyes while she spoke. Even though he obviously already knew these facts since he’d been experiencing them from his side of things, he maintained the open posture of “the learner.”

He also knew from having witnessed it, that she was terribly wounded. He was trusting me that they would both benefit now if he offered attuned listening to hear her side of the whole story once again.

He reflected each piece of it back to her, in the small chunks she gave him, checking each time, “did I get it?”  She’d nod or say “yes,” when he did, or clarified if there was a part he didn’t get quite right, and he’d try it again until he reflected it correctly.  As John stayed focused on gathering the full picture of feelings, recollections and thoughts from Shannon, it helped him stay present and nondefensive. If she was ever going to trust him again, Shannon needed to see him fully engaged – emotionally and cognitively – with her experience.

At one point, she stopped and asked him how he was feeling.

He glanced at a feelings chart.  “Fragile,” he answered.  “But not that fragile. It hurts, but let’s keep going.”  He softened and soothed, so he could stay present.

“Tell me more,” he said until she was all finished, and he’d reflected it all back to her with loving kindness.

John heaved a full breath and paused deeply, with eyes closed.  Then his gaze reconnected with Shannon’s, and he said, “I know I did this to you. I don’t know where my head was at.  Obviously not connecting to you like this.  And I’m so sorry.  You never deserved this.”

Both Shannon and I knew that John would struggle with an apology.  Initially He had admitted being happy with Robin, and had expressed what betraying partners often say – that he didn’t actually regret the affair.  Shannon wasn’t going to hold her breath to hear him say he wished it had never happened.  She did, however, hear what she needed most.

“I can’t make it up to you,” he continued.  “All I can do is tell you how much I want to be with you now.  I’m really feeling hopeful that we can love each other again, if you’ll have me.”

Through tears, she nodded “yes.”

He continued, “I know it’s going to take time for us to fully reconcile, but I owe you that time. I am all in.  I”m not going anywhere.”

She nodded more vigorously “yes.”  This was his promise to commit whole-heartedly to her, but I asked him to be perfectly clear.  They both needed some more words to nail down the intentions of their emerging feelings.  “Are you committing with your whole heart to stay with Shannon?  Can you let her hear that again?”

“I am committing to you now,” he affirmed, “with my whole heart.”

While Shannon longed for this commitment and accepted it, she would also need to process the trauma of John’s betrayal to piece together her fragmented sense of the timeline from the past two years. This helped her clarify her feelings about the relationship and determine what changes she needed if things were to move forward with John.

At the same time that he witnessed healthy changes in Shannon, John also saw the scars that his betrayal had left on her. When she reached out for him, they both had to acknowledge her worry and insecurity.

She had to confide to him that she needed him to check in with her, or disclose where he’d been, what he was doing on his phone or what he’d spent money on.  John willingly did these things because he understood he needed to be an open book for Shannon if she were ever to trust him again.  The trauma of betrayal wounded her brainstem, giving her a form of PTSD, which could heal in time  if he was consistently transparent with her.

For John and Shannon, the affair is not only in the past, but has been integrated into their shared story. They can each describe how it devastated their marriage, and then how together  they rebuilt a stronger, more intimate relationship.

So many factors contribute to recovery from an affair, and not every couple trying to recover from an affair is able to reconcile as John and Shannon did.  Both of them did significant individual therapy to bring growth and healing changes to their own parts in the relational rupture.  And most importantly, they each genuinely desired to stay together.

John Gottman’s book What Makes Love Last describes the research on betrayal in a relationship, as well as steps to take to heal from betrayal.